We found this article via CNN and wanted to share with all of you!

(CNN) — Despite two injections of anesthetic, Amy Anderson felt like her dentist was jamming rods into her tooth during a root canal. She writhed in pain as her infected tooth was hollowed with a drill, its nerve amputated, and then sealed. 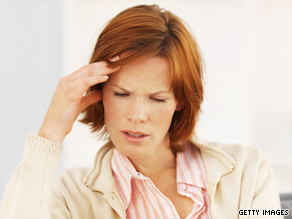 “I knew this time something was wrong. I could feel my lips,” said the Syracuse, New York, resident, who told her dentist the drugs weren’t working.

Her doctor kept assuring her she had given her a proper dose and said: “I’m almost done.”

“I was hurting so bad, I was hitting myself in the stomach,” said Anderson, a redhead. “I almost wanted to hit her.”

Studies have indicated that redheads may be more sensitive to pain and may need more anesthetics to numb them.

New research published in this month’s Journal of American Dental Association found that painful experiences at the dentist might cause more anxiety for men and women with red hair, who were twice as likely to avoid dental care than people with dark hair.

“Redheads are sensitive to pain,” said Dr. Daniel Sessler, an Outcomes Research Department chair at The Cleveland Clinic, in Cleveland, Ohio, who is one of the authors.

“The persistent rumor in the anesthesia community was that redheads were difficult to anesthetize,” Sessler said. “They didn’t go under, had a lot of pain, didn’t respond well to anesthesia. Urban legends usually don’t start studies, but it was such an intriguing observation.”

This led to two studies. In 2004, research showed that people with red hair need 20 percent more general anesthesia than blonds and brunettes.

A 2005 study indicated that redheads are more sensitive to thermal pain and are more resistant to the effects of local anesthesia.

While blond, brown and black-haired people produce melanin, those with red hair have a mutation of this receptor. It produces a different coloring called pheomelanin, which results in freckles, fair skin and ginger hair. About 5 percent of whites are estimated to have these characteristics.

While the relationship between MC1R and pain sensitivity is not entirely understood, researchers have found MC1R receptors in the brain and some of them are known to influence pain sensitivity.

Non-redheads can also carry a variant of the MC1R gene. In this dental study that had 144 participants, about a quarter of the non-redheads had variants of the MC1R gene. These people also experienced heightened anxiety and avoided dental care compared with others who did not have the variant.

There is no commercial test available for variations of the MC1R gene.

After Sessler and his colleagues published the first studies about redheads and pain susceptibility, he received nearly 100 e-mails from redheads around the country who complained of terrible experiences at the dentist’s office.

Dr. Catherine Binkley, an associate professor at the University of Louisville’s School of Dentistry, in Kentucky, also observed the same phenomenon in her 25 years of practice.

Her redheaded patients seemed “anxious and didn’t get numb. It’s a difficult experience for them,” said Binkley, one of the study’s authors.

But this doesn’t seem to affect all people with red hair.

“I have a [redheaded] hygienist that I have to numb up a lot more than normal, ” said Dr. Peter Vanstrom, an Atlanta, Georgia, dentist. “She’s very sensitive. I have another redheaded patient who is tough as nails, but his father is extremely difficult to numb.”

Binkley said the best tip for dentists is to “pay more attention, evaluate everyone for dental anxiety, and ask them about previous experiences.”

“If you know someone’s anxious, do different things,” she said. “Make sure they’re numb before you start working on them.”

Patients who’ve had bad experiences with pain should inform their dentists.

The next phase of research is to evaluate whether more anesthesia is needed for people with red hair and those with variants of the MCR1 gene for dental procedures.

The authors say an unpleasant incident — much like the one Anderson had this January — could cause patients to postpone dental care and exacerbate any problems they might have.

Anderson got a root canal because she dreaded the dentist after a bad experience of getting cavity fillings. Inevitably, Anderson has to return to her dentist to follow up on her root canal and this fills her with apprehension.